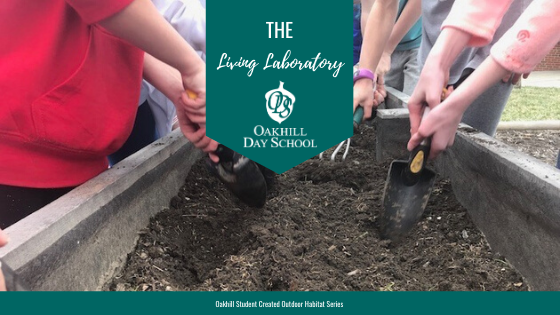 Looking to do something this Earth Day but stuck at home?

There is no better place for Earth Day than your own backyard.

Composting is relatively easy, and it will provide lots of hands-on opportunities for your family to connect with nature.

Oakhill Day School has been composting for over a decade, and the program continues to grow. We talked to members of Oakhill’s Compost Club to help you learn how to compost at home.

The Science of Composting

Decomposition is the breakdown or decay of formerly living tissues. Decomposers, such as bacteria, fungi, worms, and arthropods, transform dead things as they eat them and return their broken down parts to the soil. Composting is when humans manage the decomposition process to meet our goals.

The Oakhill Compost Club regularly manages the decomposition process to reduce the amount of waste we send to landfills and to improve the soil of our food gardens.

“Composting isn’t hard. The thing you have to do is repetition,” said Hadley Carlson, club member.

Each week, Compost Club members do five things in their compost piles:

To compost in your backyard, follow the same five principles.

First, the Compost Club mixes “greens” and “browns.” Greens are freshly dead things that are rich in nitrogen and carbon, including food scraps and grass clippings. Even coffee grounds are considered “greens” because they are freshly into the decay process. Browns include long-dead things like wood chips, sticks, and autumn leaves, which are rich in carbon but not nitrogen. A compost pile needs both greens and browns to function properly.

Second, the members monitor moisture. Too much moisture can trap out oxygen and too little moisture prevents bacteria and worms from moving through the pile.

Third, they chop large pieces. Members hack up apple cores with shovels and trim sticks down with pruners.

Fourth, they mix the pile, so greens, browns, moisture, and air get circulated.

Fifth, they shape the piles. By keeping the compost in a pile, moisture inside is prevented from evaporating. The pile shape also retains heat, which allows decomposition to happen even when air temperatures drop.

What if I don’t have a bin?

If you don’t have a compost bin, keep in mind the five principles above. Oakhill uses multi-bin systems specifically built to compost large amounts of material, drawing from about four acres of space and two cafeterias. However, the same principles are at play. As long as you can accomplish those five things, the bin is just a container. Bins can also be purchased, including the Soil Saver, pictured below, which can be ordered and delivered. Or you can make a bin - using old materials you have from the garage or around the yard. Successful composting happens in converted trash bins, bins made from pallets, bins made from new lumber, piles surrounded by chicken wire or piles not surrounded by anything at all!

Compost Club members have found they often have to problem solve. For example, when the regular-sized wheelbarrow proved too heavy when filled with materials, they invented smaller contraptions to more easily transport the greens and browns. Using rope, scooters, buckets and crates, they made their own compost transport devices!

Before diving in completely, something to consider is where to begin. Although composting is not rocket science, it does take management. You don’t want some decomposers like flies or anaerobic bacteria, which produce smells humans find offensive.

“It only smells when the food scraps get condensed or there’s no air in the bins,” said Annabelle Schneider, club member.

An easy way to get started is to take the plant pledge: commit to only composting plants from your yard. After you get used to the steps involved and the conditions of your bin, then you can experiment with simple food scraps if you choose. Some food scraps like banana peels, lettuce stems, onion tops, and apple cores are easy to compost but still require more management than just leaves and grass clippings. Other food waste like meat, cheese, and oils should be prevented if possible and then put into the trash because the way they decompose is different from plant matter.

This Earth Day, consider composting in your backyard. It will make a world of difference!